What causes kidney and urinary stones?

Urine is produced by the two kidneys situated high in the abdominal cavity, and comprises water associated with waste products of the body. It passes down narrow tubes called the ureters into the bladder, which stores urine until a convenient time for it to be excreted.

Stones in the kidneys and urinary tract occur commonly in Singapore and Southeast Asia, and usually occur in patients aged above 40 years. They affect men more often than women, and form as a as a result of urine with a high concentration of certain chemicals (such as calcium, oxalate, phosphate, uric acid and others) and a low concentration of substances that stop stone formation (urinary inhibitors such as citrate and magnesium). Most urinary stones are made up of calcium oxalate or calcium phosphate, whilst struvite, uric acid and cysteine stones are less commonly encountered. Risk factors for urinary stone formation include (1) urinary tract infections; (2) cystic kidney disease; and (3) various metabolic disorders such as gout1.

How are kidney stones diagnosed?

Kidney stones are often asymptomatic. They are usually detected when they cause severe cramping pain in the flanks, which may spread down to the lower abdomen. Nausea, vomiting, and blood in the urine may be accompanying symptoms. Fever, chills and painful urination suggest that the stone may be associated with a urinary infection. Urine analysis, X-rays of the abdomen and pelvis and ultrasonography of the kidneys are usually the first tests to confirm the diagnosis (figure 1). Computer tomography of the urinary tract, popularly known as a CT urogram, gives the most accurate information of the position of the stones and the associated anatomy of the kidneys, which may be swollen from the stone causing obstruction to passage of urine down the ureters.

Illustration
Figure 1: Abdominal X-rays showing
(a) stone in the left upper ureter;
(b) staghorn stones in both kidneys. 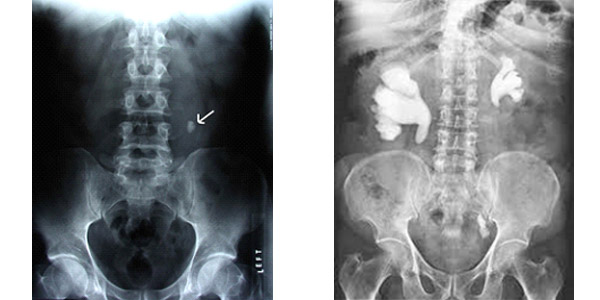 What treatments are available for urinary stones?

Most urinary stones are small (<5mm), and will pass out of the body spontaneously without need for surgery. For larger or impacted stones, treatment objectives are to eradicate the stone and relieve obstruction to promote recovery of kidney function. In recent years, new approaches and technologies have been developed to eradicate such stones.

Which treatment is best for me?

Urinary stones are a common cause of visits to the emergency department. Patients are usually referred on to the urologist, who will then advise on the most appropriate treatment approach based on the stone’s size, characteristics of the urinary tract anatomy, and clinical condition. Advances in medical therapy and surgical technologies now allow stones to be eradicated successfully with minimal scars, less pain and swift recovery.

Dr Tan Yau Min, Gerald is a consultant urologist at Mt Elizabeth Hospital with over 17 years of clinical experience. He is internationally renowned for his expertise in minimally invasive and robotic surgery for prostate, kidney and bladder diseases. Dr Tan has received numerous top international awards for academic and clinical excellence, and was named the Outstanding YoungUrologist of Asia by the Urological Associations of Asia in 2012. He may be contacted via email at enquiries@drgeraldtan.com.sg.